skip to main | skip to sidebar

Wow! Has it been a long time since I posted! As of this Tuesday the bathroom became completely "functional" - it is not complete, but we can use every component! There's some touch up painting to be done, a towel bar to be hung, and some trim to be painted with a second coat... then it should be complete (hopefully before Little Man joins us!) And, it doesn't seem to be leaking!! There's not a drop of water on the floor after taking a shower!

The shower is fantastic! I don't know why, but tile showers always feel so much more relaxing than fiberglass. It's still a small shower stall, but I prefer it to the bath in the hall bathroom. Plus, we have new towels.

This project started out as a joint project, but most of the work ended up being done by James, since pregnant bellies (and backs) and setting tile don't really go together well. I'm awfully proud of the work James did. He spent a lot of time to do things the right way - sometimes doing them more than once! Good job, sweetheart!

I asked him if he would ever consider renovating a bathroom again and he said, "Yes, but not under these time constraints." Now, I do find this a little amusing since it's been 23 months since this project was started, but I think he meant the deadline of a baby arriving. James's sister commented that we only work well under deadlines! 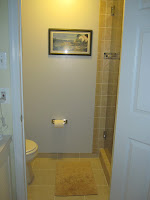 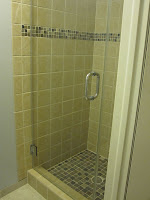 Overall pic of shower stall (as best as possible), note the glass door!! The border which James dreaded grouting because each tile is a different height. 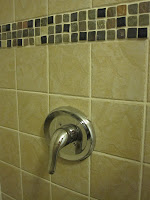 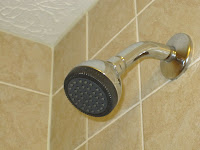 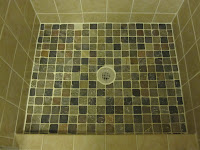 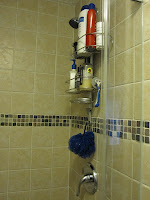 There's a light at the end of the tunnel...

...Or at least a functioning toilet! That's right... even though we haven't been blogging, a lot of work has been accomplished. We even have our closet back! 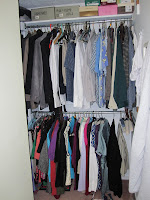 The tile floor has been completely finished, including grout and caulk. 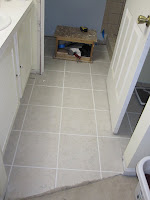 The shower walls have been completely tiled, and only one remains to be grouted. The shower floor has been cut, but needs to be adhered and grouted. 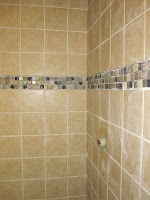 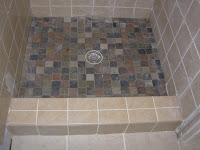 The walls have even been painted. The project will hopefully be complete in a few weeks!

In other news, we started painting the baby's room this weekend! 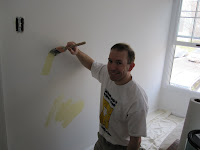 We've decided it was time to seriously work on the bathroom project again. We've purchased all the needed tile and took a great, free, 4 hour tiling class at the local Home Depot last Saturday.

James took some time off work this week to make a dent (figuratively) in the project. He put up drywall on the closet side of the shower, so it's now two rooms again. The shower basin has been started. An additional layer of subfloor has been put down. Today, he's working on laying the hardiebacker, the tile underlayment material. The floor tile pattern and placement has been determined.

There were some setbacks this week... the shower membrane was installed and seemed secure. James went to many stores to find the test plug. After finally getting one at a plumbing supply house, he tested the membrane to find that it leaked! He figured out why and knows how to make sure it doesn't happen next time, but has had to wait for 5 days for the mortar under the membrane to dry! That's why we now have a wall and the flooring is going in - otherwise the shower stall would probably be done by now!

Here's some pictures of the work progressing... 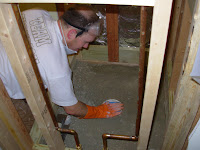 James setting the first layer of mortar for the shower basin. 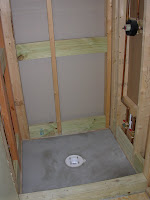 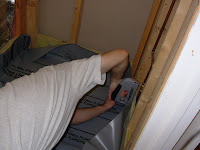 The membrane going in. 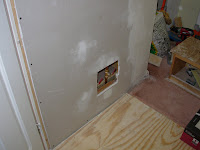 The new drywall on the closet side of the shower, including the hole cut for the shut-off valve access door. 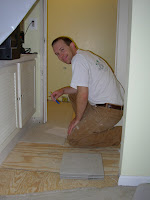 James working on cutting the tile underlayment. Note the stack of tiles in the foreground!
Posted by Anne at 2:27 PM No comments:

We did a fair amount of home improvement this long holiday weekend. Most notably, we finally finished the bathroom plumbing! 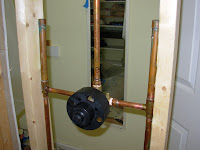 Our next task is to build the shower walls, pan, and membrane. No promises when that will be finished as it looks like I'll be working next weekend, but we really do want to finish this project!
Posted by Anne at 9:42 PM No comments:

Nope - we haven't really done much, but thought I needed to post anyway! We did complete half the domestic water plumbing (as opposed to the already-completed sanitary plumbing) a few months ago. We may have worked on it today, but the torch is at my mom's because we've been working on her house. Hey - that sounds like a great excuse for not having worked on our bathroom! Hopefully we'll have a real update soon - we're almost a year into this project!
Posted by Anne at 12:51 PM No comments:

Yay!! We made progress!

We now have a door to our bathroom. It looks kind of silly because the adjacent wall is just studs - no drywall yet. So, to enter the "bathroom" you can use the door, or walk between the studs! We did learn that installing a door is a pain in the neck. Next up: soldering the copper cold and hot water supply lines for the shower. Watch out torch, here I come!

We've been gone for the past two weekends, but we've had fun despite being away from our favorite project. We spent a weekend in Gettysburg "cabining" with good friends, including the adorable, 19-month old twins! We usually go camping but considering the age of the twins (and the nasty weather we encountered), a cabin was a smarter choice.

Last weekend we were in Berkeley Springs, WV for our 7th wedding anniversary! We shopped and had a fabulous dinner at Lot 12 (highly recommend this place!) We even purchased some more art for our dining room.

Next weekend we head to Erie, PA for James's cousin's wedding.
Posted by Anne at 12:24 PM No comments:

Yes, I know, I've been absent for the past few weeks...

Life has gotten in the way of the blog - and the bathroom renovation. We've made some success in the last few weeks - the studs for the wall are in place. We also have all the pieces to work on the shower plumbing, we just haven't done it yet. We started to install the door yesterday, but when we realized that neither one of use knew what we were doing we went to the all-knowing internet. This Old House informed us that it would take 6 to 8 hours to install the door; we had 45 minutes. Needless to say, we did nothing!

We'll be busy the next two weekends, so hopefully we'll get the door installed in 3 weeks!

This project keeps taking longer and longer...
Posted by Anne at 9:53 PM No comments: